I watched this presentation by Tim O'Neill and it got me thinking about how to develop our customer base for the business we would like to develop.
Posted by John Peters at 11:36 AM 1 comment:

Today, we loaded up everyone and headed to Morgan's Wonderland.  It is an Amusement Park for Special Needs kids in San Antonio, TX that just recently opened on April 11, 2010.  I had seen some references to it opening a few months ago, and seeing as we visit San Antonio quite often to visit our grandsons, we decided to try it this time while we were here.

In a recent post about I wrote about our 17 year-old autistic daughter Alyssa and her iPad.  Both being teachers and the parent of an autistic child, we are very interested in issues and opportunities we can provide for Alyssa. So, we loaded everyone, and I mean everyone up in two cars and headed there. Four teachers, me, my wife, daughter, daughter-in-law, our 19 year-old daughter and three grandsons, all three and under. 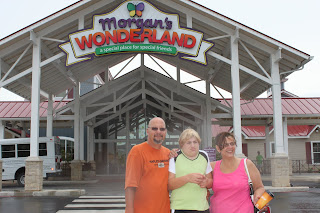 Cindy, Alyssa & I at the front entrance of Morgan's Wonderland
The park, being relatively new, is very clean and looks great.  As soon as you check in, everyone in your party gets a wristband with a GPS tracking device which works with several location stations throughout the park to help you locate everyone in your party.  We tried it several times and it was pretty convenient to see where everyone was just a few minutes ago.

You can see as soon as you arrive that the park is different from most other theme parks.  Today, there were very few people there.  I'm sure that there are days when there are more people in attendance, but today, it seemed like at times we were the only ones there.  They have a group of very nice volunteers in addition to people who get paid to work there.  Everyone was VERY NICE and helpful.


EXAMPLES:
The Sensory Village, which is a must, had quite a few people there to help explain what everything was and how it worked.  Once again very nice.

When you come, don't expect thrill seeker's rides, remember, this amusement park is designed for kids with special needs.  But they have a train, a carousel and some cars, which are all handicap accessible.  So, this was pretty cool.  Our daughter, Alyssa, as well as our three grandsons, all seemed to have a wonderful time!


Alyssa ridding one of the Exorcizor horses. She liked it!
Recommendation:  If you're going to be in San Antonio, TX and you have some time, go!  You will be glad that you did!  I would think if you live close to San Antonio, this would be a great place to take your class if you are involved with special education kids.  They really seem to have their interests in mind.

There are a lot of adaptive attractions for kids to try.  The two videos were taken in the Sensory Village on the Exorcizer Horses and in front of the green screen where you can view yourself on TV!

7 Days To A Better Edublog - Final Blog Post and Reflections

Note: I'm participating in a mini-course on writing a better Edublog.  7 Days To A Better Edublog offered by Stephanie Standifer who blogs at The Change Agency.


Well, it has been an interesting week.  It started in Austin, TX where I was participating in a 4-day Summer Science Institute where we weren't given internet access by The University of Texas for our laptops.  Fortunately, there was a computer lab set up and for two of the four days, my sessions were in the computer lab!  I swear, I really did pay attention to the presenter, well most of the time with a little time for keeping up with the mini-course!


The week has ended in San Antonio, TX where I am spending a few days before heading down to Brownsville, TX for a family wedding.


I want to make sure to the thank Stephanie Sandifer for offering this mini-course.  I feel that all of the participants have taken something away which will hopefully encourage them to continue their own blogging adventure.

So what have I learned?

What would I do different next time?
The Challenge?

So, I wanted to ad one more block to my reflections post and challenge myself with everyone else to keep up what they have started.

While reading Stephanie's post, Setting Up A Blog Schedule, she made a good point about a "Weekly Links Post".  That's a really good idea.  Not only can you keep blogging this way, but I'm always trying to remember where I put a link to a good resource or web application that I ran across.  This would be a good place.

Stephanie also suggests a "Current Events Post".  This would probably be the easiest post for most Edubloggers to write.  There are so many good resources out there that we find out about this would be a great place to write about them.  I know that I get most of my good ideas from Twitter Tweets from my PLN.  I think that it is not out of the realm of possibility of scheduling and completing a Current Events Post on a weekly basis.

This is an area where I am very passionate about.  How do we encourage educators new to the Edublogoshpere to develop their interest and more importantly, develop their own dynamic PLN?  I've wondered, especially during the course of this mini-course, just exactly where my place in Edublogosphere actually is?

I think one of the best things that I can do is several fold:

Note: I'm participating in a mini-course on writing a better Edublog.  7 Days To A Better Edublog offered by Stephanie Standifer who blogs at The Change Agency. Following is a link to ALL of the posts by the course participants, so far.
Day 1
David Russell
Elaine Willis
John Peters
Dave Lehnis
Janis Williams
Vicky Sedgwick

NOTE:  Just some information on how I determined what to put with respect to the Participant's Blog Posts for the 7 Days To A Better Edublog mini-course.  I went to the comments where all of us in the mini-course have posted our comments and blog posts.  From there, I went to each blog and pasted a link from each person's blog.


If I did not post a blog post that you would like to see here please let me know.  It was probably difficult for me to find your post if you didn't link to it in your comment.  If you will email me with the hyperlink to your post I will gladly include it here.  It's not my intention to leave anything out, but it is not beyond the realm of possibility.  If I did, please accept my apology, it was not intentional.
Posted by John Peters at 11:05 AM 2 comments:


Get Your Boots On!

I came across this video while watching the news Friday afternoon.  It's a story about a group of ladies who are making a statement.  A statement of support of our American Troops and a fashion statement as well.

In partnership with the U.S.O. the five ladies who started this campaign, are donating $45.00 from the $129.00 price of the cost of each pair of military boots purchased.


The Boot Campaign is a grassroots initiative started by five women from Texas known as the Boot Girls. In partnership with the USO, the Boot Campaign is a new way Americans can show their support for our active duty service members and veterans. This grassroots campaign has captured the attention of American celebrities and civilians – from professional athletes, politicians, country music stars and more – and is quickly gaining momentum. Money raised will support troops and veterans through the work of the USO and the Lone Survivor Foundation.

The Boot Campaign provides Americans with a tangible way to give back to our troops by buying a pair of combat boots and proudly wearing or displaying them. So “Get Your Boots On” to help show appreciation of our military heroes who serve and sacrifice everyday for our nation!

Note: I'm participating in a mini-course on writing a better Edublog.  7 Days To A Better Edublog offered by Stephanie Standifer who blogs at The Change Agency. It should prove to be an interesting week.
Resources:
The Boot Campaign Source Video - Fox News
The Boot Campaign - Website
Posted by John Peters at 8:42 AM No comments:

So, I thought that I would at least be topical for today.  I'm  at a conference this week at The University of Texas.  Today, the topic is Fire Ants and this video was shown.  Interesting.  Thank goodness they don't live where I live!

To say this summer has been somewhat hectic would be an understatement! I've traveled to Austin and San Antonio TX twice so far this summer. There was also a week-long trip to Denver, Colorado to attend ISTE 2010. Still, we have make a trip way down into the valley of  Brownsville, TX next week to attend a family wedding.

Wow!  As I look at my calendar I just realized that in just 24 days, teachers report back to school for the new school year!  Where has the summer gone?

One of the things I have really been looking forward to this summer was traveling to The University of Texas and attending the MD Anderson K12 Environmental Health Sciences Summer Institute.  This institute is open to all Texas teachers who have an interest in science.

One of the neat things is that the institute itself is FREE to the  teachers that are attending. I filled out a short application during the spring and was notified be email that I was accepted!  There are also some small travel grants to help defray the cost of traveling to Austin, TX and to help pay for the cost of your hotel room.  Pretty neat if you're on a budget or if  funds for professional development are sparse in your school district!

I'm listing the sessions that I attended during the week.  While I was talking to the Institute's Director, I was told that they have different sessions each year and that the most popular ones, based on the teacher's evaluations are repeated in succeeding  years.  So, one could attend one year and then come back in another year and have completly different sessions!

Dr. Robin Fuchs-Young, Ph.D. is the Director of The Community Outreach and Education Program, with MD Anderson, which sponsors this institute.  Robin also taught the Day 1 Session, SCREAM: Cancer And The Environment along with Dr. David Mitchell, that I attended and enjoyed very much.  Dr. Fuchs-Young did a rather nice job of presenting the material and was very interesting and passionate about her field of study, especially in the area of Breast Cancer Research.

The Summer Science Institute is funded by various grants and is available to any Texas Teacher at this time.  I did hear that they are working on securing additional funding to allow Louisiana Teachers to attend in the future.

If you are a teacher in the state of Texas and would like to attend a really worthwhile conference that is well run, has some interesting topics and presenters, you should consider applying to attend the next Environmental Health Sciences Summer Institute. By the way,  they have great food at the Thompson Center Cafe called Under The Oaks, breakfast and lunch are included!

I think that I am going to try to come again, if they will have me!

Resources:
K 12 Environmental Health Sciences Summer Institute
What Did You Do With Your Summer Vacation? - My Blog Post for 7 Days To A Better Edublog Mini-Course
Posted by John Peters at 10:34 AM No comments:

John Peters is the author of Just Blogging Around. The opinions expressed herein are my own and not necessarily those of my employer.

Some of my webpages


View my page on Classroom 2.0