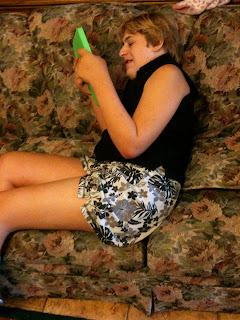 One Educational Technology area that is important to both my wife Cindy (@TeachHrfrd) and I are Educational and specifically Special Education applications for the iPad. Our Daughter Alyssa, 17, is Autistic, Developmentally Delayed and is also Non-Verbal. Although I wanted to buy one when the iPad was first released by Apple, we waited.
Alyssa goes to Hereford High School with us. We have a really good Special Education program and one of the things the kids do every day for a few hours is work. They all have jobs and get paid for it!

Alyssa's first job was working in the cafeteria at one of the elementary schools. She did this until her loud noises that she makes became an issue for the Cafeteria Manager because they were quite loud and I guess it scared some of the elementary children. Now she can't help it that she likes being around small children and gets excited and becomes noisy and loud, she just loves little kids! Anyway, after she was fired from working at the cafeteria, her new job was to shred papers, something that she really enjoys and walking around the campus with her aide Bonnie and picking up trash.

So, Alyssa is gainfully employed by the School District during the school year making minimum wage! Well other than a few trips to Walmart to buy Cheetos, Easy Mac and socks, anything on a hanger and especially anything on a hanger with a tag, we really hadn't spent any of her earnings. Cindy decided that it would be a good time to get an iPad but for Alyssa instead of me and using her money!

Since we bought the iPad we have downloaded quite a few applications for Alyssa and are constantly looking for app that she would enjoy and use. Alyssa previously had an iPod Touch and has used my iPhone to watch some of her favorite TV shows so, she is familiar with how the touch screen interface works. The iPad works the same way and as a result she is pretty proficient moving from app to app.

She enjoys viewing videos which are excellent on the iPad. When she isn't watching Barney or Clifford The Big Red Dog, she likes to see her family pictures using the photo app. I use a Macbook pro and have the iLife Suite to organize our pictures into albums so Alyssa can choose which album she wants to look at. She enjoys pictures of herself, pictures of her brother and two sisters and her three nephews. Our biggest problem with this is when she comes across a family video in church and starts to view that. When this happens, both Cindy and I see who can be the first one to turn the volume down!

Having Alyssa around can be at times, quite challenging, as with any child with her disabilities are. She has some very interesting and weird things that she does from time to time. Most of them are pretty funny, some not so funny and some we wonder if she is trying to make contact with the Mother Ship to get instructions from her home planet!


Would any of my friends like to know what it is like having Alyssa "in the house" Well, I started taking pictures this morning while she went about her daily activities.

So the day begins with getting the newspaper. We noticed she usually picks it up, goes to the corner of the yard and "taps" the paper there, then comes inside and immediately throws the plastic bag the paper comes in into the trash, wadding it up as small as she can.

Next, she takes the paper out back where we usually read it, and gets a cup of coffee for Dad. If I am up, she'll get me one, but tends to put stuff in it. I say stuff because although I like cream in my coffee, she'll pretty much put any powder substance in it (flour, sugar, splenda, atkins protein powder, etc.). She might attempt to make waffles, but I had to throw out the waffle iron because a few days ago, she made waffles....sugar waffles!! The house smelled like a bakery for a long time.

She went to the garage and helped herself to some milk, directly from the carton since she was taught this shortcut by her brother and has never forgotten it. She watched some of Clifford the Big Red Dog, but then realized the laundry needed to get done.

In the laundry room, she washed a load of clothes. She used the entire bottle of detergent, the remainder of the fabric softener, and of course a bottle of bleach! So helpful, Libbie is going to love her new jeans.

With the laundry done, Alyssa has decided she would like to ride the motorcycle. She applied sunscreen to her face, and some paper, and the counter top. Since Dad was mowing the lawn, it is a good time to eat, so she used her picture symbol book (PECS) to tell me "I Want Hot Dog". But the fridge with the hot dogs is locked now (due to the milk episode), so she just gets a bun.

Bummer, Shannon said "NO" on the singing. Still, Alyssa loves to hear Shannon say "No Pizza Hut," so she cracks up. Now she uses pictures to say, I want movie. Good idea Alyssa, maybe we will go to the movie after we clean up all your messes. It is going to take a while to get the soap out of the washing machine.

AND IT IS NOT EVEN NOON YET!

While we were in Denver at the ISTE 2010 conference we met David Ligon, EdTech Leader, who blogs at iEAR.org who came to ISTE with the purpose of researching iPad/iPod applications for Special Ed students. He wrote a nice blog post iPad/iPhone Touch/iPhone Apps for SPED/Special Needs on his blog. Cindy and David had quite an interesting impromptu session in the Social Butterfly Lounge about available applications for students with special needs. 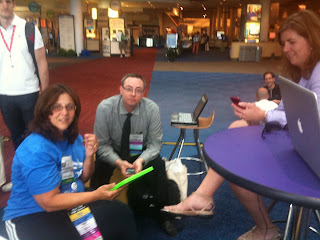 
David did a very nice job with his list of SPED/Special Education applications on his blog, so I encourage you to go over to his blog and look at them.

Now, my wife is one of the best educators that I know. During my first year of teaching I rode with her and another amazing educator Dana Friel who is also a Computer Education teacher in the same department along with Cindy, the 45 miles (one-way) from Amarillo to Hereford every day and learned a lot from the two of them about teaching. So, when I have a question about anything about education, Cindy is the first one I bounce an idea off of.

Cindy works with more special ed students than I and as a result, has used the iPad in her classroom more extensively than I since we bought it a few months ago. Her knowledge of worthwhile SpecEd apps is pretty good and it was fun to watch the interaction between her and David. I put my two-cents in every once in a while but I am a rank amateur and the odd man out with two great educators like these!

I wrote about my iPad experiences at ISTE 2010 and at Edubloggercon in an earlier post called What's My Line? Er...PLN where I sat in on a session with David Warlick called "Are iPdas a 1:1 Solution?" Afterward I had a 10 minute conversation with David on whether or not the iPad was going to be a "game-changer" in educataion and it was fantastic. I think that we both agree that it will be but the iPad's place is still being defined.

So, as you can see, we are very interested in how our daughter will use her iPad, what new and worthwhile applications we can find for her to use is something we are always trying to discover.

I will continue to add Resources for new iPad/iPod Touch applications to this post as hopefully, people make comments and give me some fantastic ideas from my PLN.

App Update: July 7, 2010
I just found out that the Amazon Kindle app is available for the iPad, iPod Touch and iPhone and will work across all of your mobile devices. Now while Alyssa doesn't read books a lot, I will put on her iPad for the times when I get to "borrow" her iPad.

Our synergy from the ISTE 2010 meeting may hopefully start a revolution in the development of more special needs apps for the iPad. Kudos to you all for furthering this very important cause!

All the best,
David Ligon (@EdTechLeader)

I too hope that we can unleash the real potential of the iPad for children with special needs. It will give them many hours of fun and independence by being able to enjoy learning, regardless of their disability.

IPad is not intended to replace computer in anyway.It however does a lot of things which a computer does and surprisingly it does better and faster.Ipad is an amazing invention from apple.It has many flaws and drawbacks too.Apple should consider those things.It doesnt have camera even.I usually shop on this online shopping site for ipad when i came acros with different blogs.Do check it out for many other products.Ipad and blackberry books are both the same.Blackberry book comes with many new feature while ipad lacks sum functions.

John Peters is the author of Just Blogging Around. The opinions expressed herein are my own and not necessarily those of my employer.

Some of my webpages


View my page on Classroom 2.0